But you know what? It’s okay. Keep trying. Never give up. Don’t you dare think that you do not have value because you’re without a job. You are brilliant. You are able. You are not a title and you are not just a person. You are YOU. There is no one else like you.

But if you’re at a job, and you’re not appreciating, be sure to stop doing that. And enjoy your life.

Often in life, as a leader of many who is also a young adult, I’ve had a lot of lash back. Not that people didn’t like what I was doing, or didn’t want to walk alongside me, but that people often times didn’t (and don’t) believe what I am saying or that why I am acting is genuine.

But the reality is, even in this broken world, some people are still honest. And some people really do still care about you. And they don’t do things half way. They are loyal. They will come in the middle of the night – probably with your favorite tray of cookies.

And they aren’t here to push you under or away.

In the midst of bombings in Boston and explosions in Texas and entire countries unaware of the outside world because of tyrants, be a sparkle. Be a light. Don’t let people who aren’t genuine make you think that you can’t be either.

It’s that kind of thing that gets you in the hall of fame.

I have a new goal: 5,000 likes on my professional facebook page (https://www.Facebook.com/ShannaDecker), and ONE MILLION Twitter followers so that when families with childhood cancer are looking for healing, they come to someone who has walked this road before them.

A simple image of rotationplasty. Check out videos to see how a prosthetic makes this work!

It’s simple – there are a lot of resources, but not as many people who understand childhood cancer and amputation long term. I have a rotationplasty – my leg is backwards. You can see videos here: http://www.becauselovewins.com/media.php?type=2 I have had chemo, been in a hospital for nearly a year, major surgery, asked all the questions, and watched my best friends die.

And I want one thing: to let those doing this after me know that they are not alone. To point them the right direction. To help them heal.

The aim here is that search engines find me first when families are searching a midst childhood cancer and that I can then save them from finding the wrong resources – give them the right direction right away! The aim is to give them hope. To be their hope. 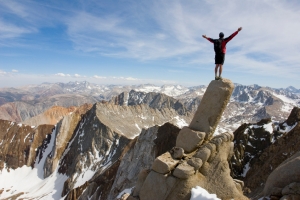 Those three words, “You have cancer.” can take our breath, our peace, and our dreams. We are left on our knees and given nothing (or so we feel), but the small light of hope that the chemo, surgery, or radiation, after all the pain may lead us back to normal. And we all know we wonder if even those things can do the trick.

I know as well as anyone how easy it is to crawl into a hole of despair. Whether our trial is cancer or something else, the “Why me?” question surfaces, and if it doesn’t, others are sure to ask why we don’t feel bad for ourselves. It is an incredible temptation for someone with a chronic illness to allow despair into their lives. Slowly we open the door a little further and it makes us think we’ll never be happy again. It forces our eyes onto the darkness and the pain rather than the future, the hope, and the things we do not yet know in our future.

BUT despair is only a tempation. It has no right to live in our lives. Wherever we are and whatever we’re doing, we are doing it ALIVE. Yes, it may hurt, but pain is temporary. Yes, we may die, but that doesn’t mean it’s the end. Yes, our families may need to learn to live without us for a while, but we will meet again.

Despair is only as large a monster as you let it be. Today, close the door. Dare not to despair. Dare to climb one step at a time and let hope live within you. From one cancer survivor to you, I promise, it can be done. And it will be.

All the sad times before have gone away. Let them do it again today.

*Shanna Decker is a professional motivational speaker since the age of 7. Follow her online and contact her for your event at: www.BecauseLoveWins.com,www.Facebook.com/ShannaDecker, and https://twitter.com/Shanna_Decker.

When I was diagnosed with bone cancer at the age of seven, having a backwards leg at the end of the months and months of treatment didn’t ever cross my mind. And I suppose, that’s normal, right? Would you think “Oh, bone cancer. Ouch. Wonder if they’ll turn my leg around.” Maybe you would. I don’t know, really. But nonetheless, I didn’t. And I’m pretty sure you wouldn’t either, right? 😉

In fact, I had no idea what a rotationplasty (the official name for this backwards legged-ness) was until I was viewing videos of it in another language given to me for purpose of further explaining what the rest of my life would be like. The people in the videos were playing ping pong. As a child who was accustomed to jumping from trees, I wasn’t entirely sure that was my goal in life, and wasn’t so keen on the idea. And I didn’t get keen on the idea for quite some time. I would have done whatever my parents said, and I sure liked the doctors, but I was an honest kid, and I wanted to run. I wanted to play. And I wanted to jump from trees. And I wasn’t sure that this leg thing was going to make that possible. Plus, I would look different.

Note, not strange. Not ugly. Not a freak. Just different. Just an adjustment. Something of which I wanted no more.

To be honest, the emotions I felt were similar to those present at the death of a loved one. I felt as though part of me was dying. If even for a moment, as a 7 year old, I had to learn that I was a soul, not a body. Or else I would have cried myself through the rest of life. I would have grieved the loss of part of me, rather than realizing that I was only becoming more of me.

Rotationplasty has been the greatest blessing of my life. If you would have asked my thoughts on it 15 years ago, I would have laughed at you, probably. Well, maybe not laugh. I was young. I probably would have smiled at you and walked away thinking that wasn’t going to happen – ever. But, in the mantra of Justin Bieber – never say never! Right, JBiebs?

In June of 1998, I had the surgery done. Three days later, I was walking. A year and a half after that I was running, swimming, riding bike, walking with my friends, skipping, and most importantly – climbing trees. I am a soul every day. With a totally awesome body. After all, as I learned, the only disability we have is a poor attitude.

Check out videos of the surgery on my website here: http://www.becauselovewins.com/media.php?type=2

These days, they don’t give children facing this a video in another language. They give them a video of me rollerblading past a video camera. And then they give them me. I get to walk with them. I get to be what I didn’t have when taking my first steps again.

Here, you see me with my good friend. He’s got a backwards leg too. He just turned five, and you can’t tell from this photo, but we don’t need legs. We have each other. And we have full hearts. And nothing will ever stop us. Sometimes we tell people that our legs are on backwards. And finish each other’s sentences when no one believes us with… “No, really.”

Life is beautiful beyond words. Dance on your legs – one, two, three, or eight of them. Backwards or forwards. Just live everything.

*Shanna speaks worldwide on a variety of topics. She is a professional fundraiser by trade and also a program coordinator for a non-profit her family was a part of founding to support families with childhood cancer. She is a dreamer. She is a do-er. She instills hope in all she meets, and she’ll talk with you about how all tragedy is an opportunity – and that we just have to learn to live that way. Contact her manager for booking information at http://www.BecauseLoveWins.com!

Have the most beautiful of days. And if you don’t know what to do, love. It always wins.

Conference speaking prep nights. #amputeelife #helpyafriends #teachsomekindness #hangerlive2020
Throwback with my love on one of the best days. #flyeaglesfly #marriagelooksgoodonyou #philadelphiaeagles #love
Doesn’t get cuter. ♥️♥️
What an excellent way to see the ☀️ in the midst of #minnesota winter. ❄️ #americanairlines #headintheclouds #flyingonsunshine #bluesky
NYC greeting us on a layover. Not a bad view for a seat in the terminal. 🛫🌆 #neverstopexploring #nyc #americanairlines
We might not be #1 in the #NFL this year, but they’re still #1 in our hearts. Thanks for the stellar party, @philadelphiaeagles! Also we love you @cj_wentz11 and @mads_wentz! #flyeaglesfly #philadephiaeagles

21 Years Cancer Free!December 31st, 2019
May every day before and after be a celebration.